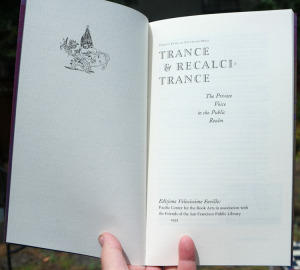 Checklist of Poltroon Press titles, exhibits and essays by the principals.

In 1995 the staff of the Special Collections Dept at San Francisco Public Library generously offered to host a 20th anniversary retrospective of the press. While we were assembling material for the show, David Wirshup of Anacapa Books put up some money for a catalog and his gift was matched by the Pacific Center for Book Arts. Steven LaVoie who was then librarian and weekly columnist at The Oakland Tribune, wrote an introduction titled “The Spirit of the Age”; I wrote a long-winded picaresque memoir, and Frances wrote about her thoughts on the relation of imagery to text. We included a list of Poltroon books and significant job work, a list of exhibits we had been part of, and checklists of our published articles. We also added 26 images of our work. Since we put it together quickly we used the Edizione Velocissime Faville (or Flying Sparks) imprint, which we had previously used on a job for the Craft & Folk Art Museum in Los Angeles.

1250 copies were printed; 1000 perfectbound with spray-painted covers; 250 printed on Classic Laid were sewn and cased into letterpress wrappers by John DeMerritt at Taurus Bindery, Berkeley.

“Poltroon Press was founded on the theory that a private press, financed by other work and not by selling its products, should not accept the formula that time is money, should not rework marketing formulae like reprinting famous authors in textual reliquaries. The phrase your money or your life is the ultimate threat to intelligent creativity. Our productions, in all of their variety, have resulted from the intensely private use of time, or the practices of both trance and recalcitrance. Years of dream-time excursions have resulted, not in the coherent, repetitive Body of Work beloved of critics and collectors, but in a range of activities, from Alastair’s writings on contemporary African music as well as biblio-histories of important literary presses, to my writing on the nature of contemporary punctuation and my expansion of the act of reading into room-sized sculptural tableaux and poetry gardens. Instead of collectibles we have produced our own lives, lives which are their own satisfaction, not defined by exchange for money, power, or the trappings of a glorious career.”
— Frances Butler, Trance and Recalcitrance: The Private Voice in the Public Realm 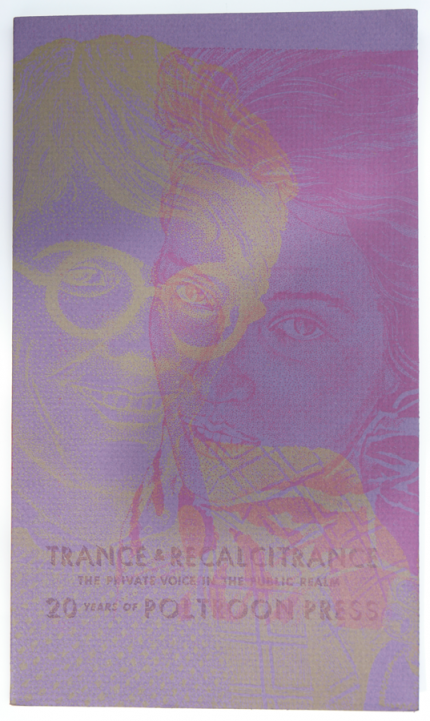 Checklist of Poltroon Press titles by Frances Butler and Alastair Johnston.
$0.00 x 1
$5.00 (shipping)
Total: $5.00
This is where the Express Checkout Button will show. View it on the front-end to see how it will look to your visitors