Let petty kings the name of parties know:Where’er I come I slay both friend and foe
The Rehearsal by George, Duke of Buckingham, 1671

Complete facsimile reprint of the scurrilous mag that documented the San Francisco poetry wars of the late 1970s. With essays by the principals and photos by Maureen Hurley & David Highsmith.

Many in the Bay Area poetry scene remember the attack of the L=A=N=G=U=A=G=E  poets that factionalized the scene in the 1980s. What had been a cozy little circuit of parties and readings suddenly became a political inferno with the Stalinist bullying of self-appointed pundits whose names ended in “-an” –Silliman, Watten, Perelman, Harryman, Hejinian, &c. (The Suffix School) who became a Junior High Clique of Poetics deciding who was “in” and who was decidedly “out.” While they are currently part of the establishment in American poetics they didn’t get there without a fight, and the voice of the counter-insurgency was a mimeo magazine called LIFE OF CRIME, edited by Steve Lavoie & Pat Nolan. Throughout the 1980s LIFE OF CRIME kept up a running commentary on the shenanigans of the poetry world, including the Language Gang’s Attempted Assassination of Ted Berrigan, and other scandals. Many people were quick to add their voices to the uproar, including me, and I have to admit it, I am not proud of some of the things I said. A lot of nasty stuff was said in the heat of the moment. Soon the magazine had actual subscribers & letters poured in from all quarters. Contributors included Andrei Codrescu, Tom Clark, Dave Morice, David Benedetti, Keith Abbott, Steve Abbott, Lewis MacAdams, Nanos Valaoritis, and many others. Now Poltroon Press has reprinted the entire text of LIFE OF CRIME.

When I had the idea of a facsimile edition, Steve Lavoie objected. He felt that since it had destroyed his own literary reputation why would he want to see it come back again? I persuaded him that he has no friends anyway so what does it matter. Nolan lives far away so no one is going to try to track him down and drop a blazing cross on his front lawn.

After the invective died down the magazine evolved into a decent literary sort of journal with special issues on Ezra Pound and French Surrealist Poetry. And because it happened on the spur of the moment and was mailed out to an ever-changing list, no one — not even the editors — has a complete run, so I felt it was important to preserve it as a piece of literary history. In addition LIFE OF CRIME put on one of the major poetry events of the decade, the On Broadway Benefit show, with readings by Joanne Kyger, Bob Kaufman, Alan Bernheimer, Darrell Gray, Andrei Codrescu (by telephone) & others, and my band Girl Scout Herring performed. In conjunction with the publication, I have uploaded Darrell Gray’s reading to YouTube.

I dropped off the first copies at Moe’s Books, Berkeley, and within a day, local poet Owen Hill wrote on facebook: “reading Life of Crime from Poltroon Press — mean tough and funny — and am wondering if, somewhere in the poetry world, something interesting is happening now. Probably so–I’m just missing it.”

Joanne Kyger wrote: “What a service to the community to reprint Life of Crime and produce all that communal fuss on blog Silliman and Pajama. I love It! The pictures are some of the best arrows back to the past. I don’t think people remember the effrontery showed by the language ‘school’ with their intellectual self righteousness and humorlessness.”

Her reference is to the silliblog, if you have time to wade through all the verbiage.

J.J. Phillips (genius author of the novel Mojo Hand) wrote: “Perhaps because you’re intimately familiar with the material it seems ‘less nasty’ to you, but not to me. However, my quibble would be with your use of the word nasty because that implies it’s just catty, unwarranted, knee-jerk, sour grapes, whatever; when in truth it is trenchant vitriol, and is, in my estimation, legitimate criticism. Relegating any and all strong, inventive, witty criticism to being nothing but nasty digs, impolite, rude, boorish and so forth is another societal tool of repression! I deplore gratuitous vitriol, ‘mean-spirited’ ‘nasty’ digs, when there is no legitimate reason or context. There is both reason and context for what’s in Life of Crime.” 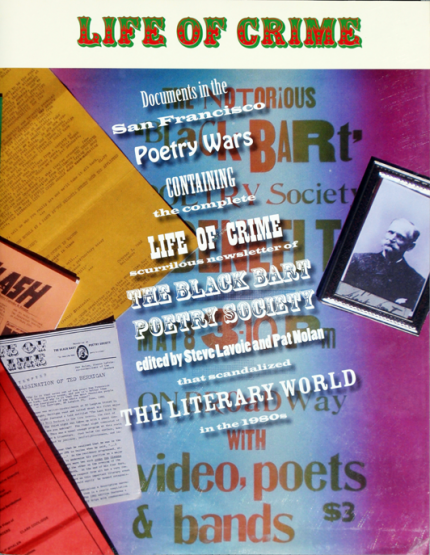 look for a second-hand copy on AbeBooks or Addall